By the end of this lesson, the student will be able to: define the terms rank and rank scale. explain the relationship that exists between the grammatical units on the rank scale. analyse clauses according to their constituent units.

By the end of this lesson, the student will be able to:

b)explain the relationship that exists between the  grammatical units on the rank scale.

c)analyse clauses according to their constituent units.

The grammar of every language is made up of a finite set of  units that realise the grammatical meanings in the language.  These units are not of equal sizes; some realise larger units of  meaning than others. We refer to each of these units as a rank.  Larger units of meaning are normally realised by bigger ranks  while smaller units of meaning are realised by smaller ranks.  Across languages, we identify one rank that tend to realise the  largest grammatical meanings in the language. This unit is the  clause. It serves as the interface between grammar and  discourse. Languages, however, differ in the number and nature  of units lower than the clause. Other strata (or levels) of  language such as phonology have their own ranks different from  those of grammar.

i.grammatical systems such as tense, number, and person are  normally realised at the rank of word.

iv.morphemes are the basic resources that feed the meanings of the  higher ranks. They have no systems of their own rank neither can  they be analysed into structural elements. A morpheme is  indivisible.\

What is Rank Scale?

The clause can be defined in terms of its grammatical size on the rank scale. It is the biggest/highest grammatical unit within which the lower units are found.

The phrase/group is the next grammatical rank or unit  below clause.

The group/phrase functions within the clause. e.g.

Functions such as Subject, Object, Complement, Adjunct  are functions within the clause and they correspond to  groups/phrases.

Some grammarians of English make a distinction between group and phrase.

Group and phrase are different grammatical units of the same rank, i.e. they  are equal in grammatical size. They both perform the same level of functions  within the clause.

A group is an expanded word; the nucleus is a lexical word (e.g. man)  exapnded by the addition of modifers (e.g. A young handsome Ghanaian man).

A phrase is a reduced (or contracted) clause; the nucleus is a preposition (‘a  minor verb’; e.g. in) with a participant realised by a noun group (in the box).

The phrase is therefore more complex than the group; the phrase normally  embeds a group in its structure.

According to this analysis, English has only one class of phrase called the  prepositional phrase and three or four major classes of group, including the  noun group, verbal group, and adverbial group. The fourth group, the  adjectival group is considered by others to be a reduced form of the noun  group.

Examples of groups as expanded words

Example of the prepositional phrase as a reduced clause

The word is the grammatical rank below the  group/phrase.

Morpheme is the smallest grammatical unit or  rank.

Morphemes realise grammatical functions or  meanings within the word.

Relationship between Units in the  Rank Scale

We can view the relationship between units in  the rank scale from two points of view: 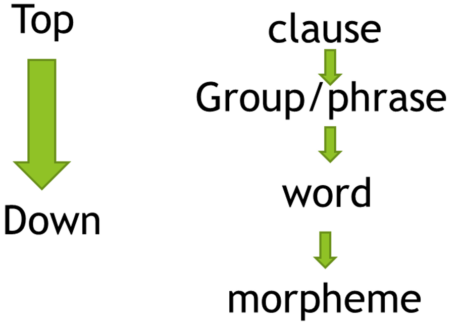 Clause: The police had arrested the thief

Groups: Made up of three groups; the police(noun group)  Had arrested( verbal group)

Words: the, police, had, arrested, the thief  Are made up of 8 morphemes

The constituent relationship shows that lower  grammatical units serve as constituents of a unit  immediately above it. 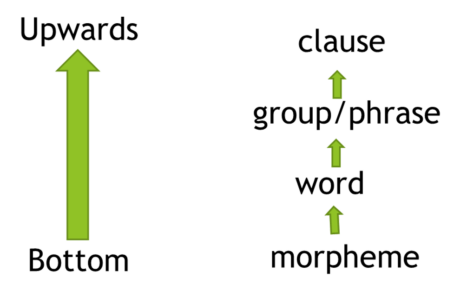 1.(a) Define rank in one sentence.

(b)How many ranks do we have in the grammar  of English? Mention them.

(b)Analyze the following clauses to show that it  consists of lower grammatical ranks. Use the box  diagram shown in slide 12:

3. In two paragraphs, explain the two kinds of  relationship between units on the English  grammatical rank scale. Provide illustration in  your explanation