TOPIC: SUPERSTRUCTURE OF A BUILDING

By the end of this lesson, students must be able to:

BASIC COMPONENTS OF A BUILDING

Generally, there are two major components of a building project which are Substructure and Superstructure. 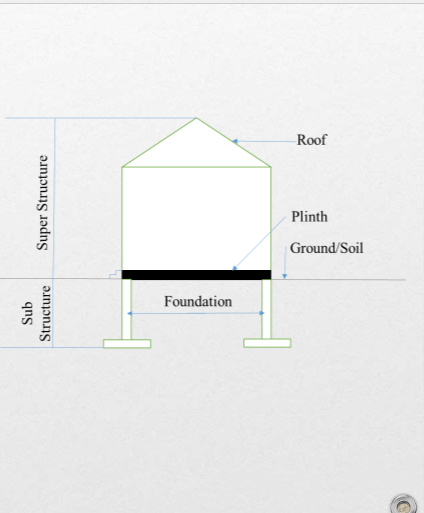 Plinth is therefore defined as the portion of the structure between the surface of the surrounding ground and surface of the floor, immediately above the ground. The level of the floor is usually known as the plinth level. The built-up covered area measured below the floor level is known as plinth area.

SUPERSTRUCTURE OF A BUILDING

The term superstructure refers to all parts of a building above the ground level. The superstructure of a building usually consists of roof, parapet, beams, lintels, columns, slab, walls, floor, verandah, lintel, doors and windows, stair, etc.  These components safely transfer the dead loads, live loads and other loads to the substructure (foundation and plinth) which further distributes it to the underlying earth.

The functions and components of some of the important superstructure elements are explained briefly below:

Parapet is a short wall barrier that is constructed at the edge of a terrace roof, balcony or walkway as a means of protection. This can be constructed by means of block, steel, aluminum, reinforced concrete or glass.

Slabs are horizontal structural elements that serve the purpose of floor, roofs or ceilings. These are flat surfaces with top and bottom face parallel to each other. Slabs are supported mainly by columns, beams, walls or the ground. The depth of the slab is very small when compared to its width and length.

The floor is defined as a finished horizontal surface of a building or a room where people walk. Any floor has two main components- sub-floor and floor cover. The sub-floor is constructed to support the imposed loads coming over it. This component imparts strength and stability for the floor structure. A floor cover or flooring is a suitable floor finish provided in the form of tiles, granite, marbles, concrete, etc.

A stair is a series of steps or flight that is constructed to move from one floor to another in a building structure. A staircase is a room or an enclosure where the stair is constructed. The space occupied by the stair is called as a stairway. There are different types of stairs like continuous stairs, straight stairs, turning stairs etc. 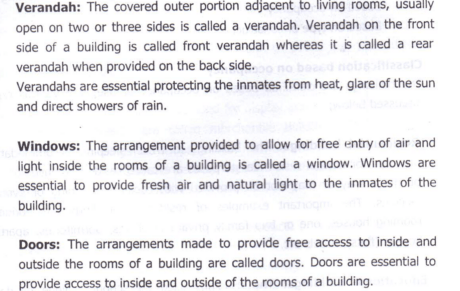 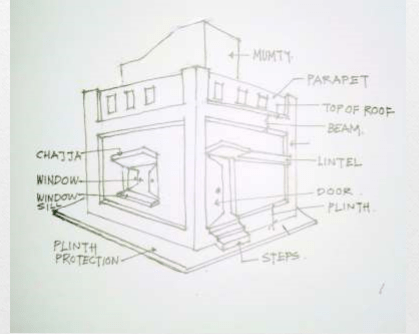 What Are the Loads of Superstructure?

1: Dead Loads: Are permanent or stationary loads which are transferred to the structure throughout the life span. Dead load is primarily due to self-weight of structural members like walls, roofs, permanent partition walls and other fixed components of the building, fixed permanent equipment, furniture and weight of different materials etc.

MATERIALS USED IN THE CONSTRUCTION OF BUILDING

The following materials are use in the construction of building;