A hormone is any chemical produced in one part of the body that has a target elsewhere in the body. Plants have five classes of hormones. Animals, especially chordates, have a much larger number. Hormones and enzymes serve as control chemicals in multicellular organisms. One important aspect of this is the obtaining of food and/or nutrients

Plants require light, water, oxygen, minerals and other nutrients for their growth and development. Apart from these external requirements, plants also depend on certain organic compounds to signal, regulate and control the growth of plants. These are collectively called as Plant Growth Regulators or Plant Growth Hormones

Plant growth regulators can be defined as chemical substances, which are either produced naturally within the plants or are synthesized in laboratories, that control all the aspects of growth and development within plants. They profoundly control and modify the physiological processes like the growth, development, and movement of plants.  They are also referred to as plant growth hormones or phytohormones.

There are different types of Plant Growth Hormone, Based on their actions, plant growth hormones are broadly classified into two major groups:

Auxin is a plant hormone produced in the stem tip that promotes cell elongation. They are produced in the stem, buds, and root tips. Example: Indole Acetic Acid (IAA). Auxins promote stem elongation, inhibit growth of lateral buds (maintains apical dominance). Auxin moves to the darker side of the plant, causing the cells there to grow larger than corresponding cells on the lighter side of the plant. This produces a curving of the plant stem tip toward the light, a plant movement known as phototropism. 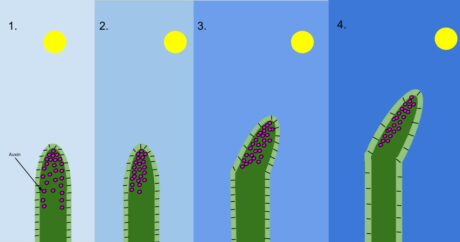 The Effects of Auxins on Lateral Bud Development;

Auxin also plays a role in maintaining apical dominance. Most plants have lateral (sometimes called axillary) buds located at nodes (where leaves attach to the stem). Buds are embryonic meristems maintained in a dormant state. Auxin maintains this dormancy. As long as sufficient auxin is produced by the apical meristem, the lateral buds remain dormant. If the apex of the shoot is removed (by a browsing animal or a scientist), the auxin is no longer produced. This will cause the lateral buds to break their dormancy and begin to grow. In effect, the plant becomes bushier. When a gardener trims a hedge, they are applying apical dominance. 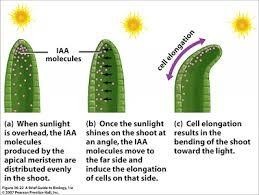 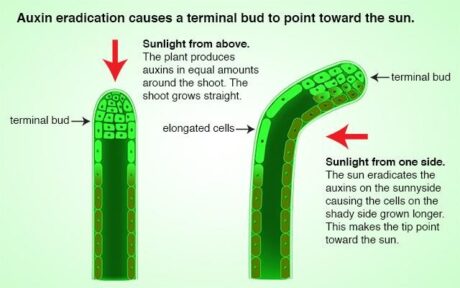