Structure and Functions of the Neuron

A neuron is a cell that transmits nerve impulses. It consists of the following parts, shown in Figure 1:

Neurons can be classified by function or by structure. Functionally, they fall into three groups: 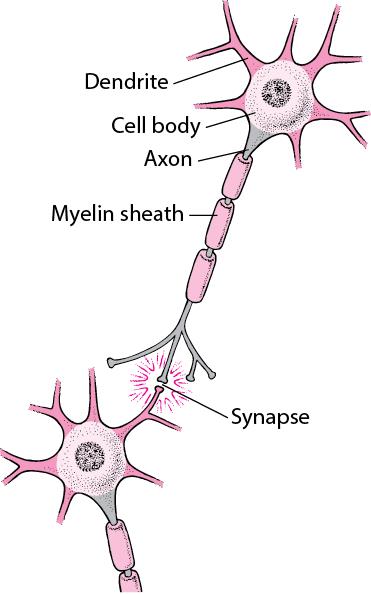 Neurons are structurally classified into three groups, as shown in Figure 1: 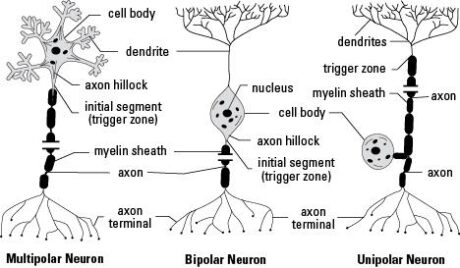 The following terms apply to neurons and groups of neurons:

When an impulse reaches the axon terminal of the axon, vesicles consisting of a chemical substance or neurotransmitter, such as acetylcholine, fuse with the plasma membrane. This chemical moves across the cleft called Synapse, which is a small gap that occurs between the axon terminal of the axon of one neuron and the dendrite of next neuron, and attaches to chemo-receptors present on the membrane of the dendrite of next neuron. This binding of chemical with chemo-receptors leads to the depolarization of membrane and generates a nerve impulse across nerve fibre. The chemical, acetylcholine, is inactivated by enzyme acetylcholinesterase. The enzyme is present in the postsynaptic membrane of the dendrite. It hydrolyses acetylcholine and this allows the membrane to repolarize.

Healthy nerve cells contain a balance of ions, ions being positively or negatively charged atoms. Because of these ions, the movement of nerve impulses through individual nerve cells involves both chemical and electrical changes. Before a neuron transmits an impulse, its outside layer is composed of electrically positive ions, its inside layer is composed of electrically negative ions. When the neuron is at rest, there is no movement of chemicals into or out of the cell. When the neuron is stimulated, electrical and chemical changes occur. At the stimulated point, the outside of the nerve cell becomes negative and the inside becomes positive. The ions change places. As soon as the impulse passes, the stimulated point returns to its original electrical and chemical state. The passage of the nerve impulse along the cell causes a similar pattern of changes throughout the neuron. Before individual parts of the cell can pass another impulse, they must rest. In some neurons, this recovery period is as brief as a thousandth of a second

Nerve impulses have a domino effect. Each neuron receives an impulse and must pass it on to the next neuron and make sure the correct impulse continues on its path. Through a chain of chemical events, the dendrites (part of a neuron) pick up an impulse that’s shuttled through the axon and transmitted to the next neuron. The entire impulse passes through a neuron in about seven milliseconds — faster than a lightning strike. Here’s what happens in just six easy steps:

When the neuron is inactive and polarized, it is said to be at its resting potential. It remains this way until a stimulus comes along.

Each neuron has a threshold level — the point at which there is no holding back. After the stimulus goes above the threshold level, more gated ion channels open and allow more Na+ inside the cell. This causes complete depolarization of the neuron and an action potential is created. In this state, the neuron continues to open Na+ channels all along the membrane. When this occurs, it is an all-or-none phenomenon. “All-or-none” means that if a stimulus doesn’t exceed the threshold level and cause all the gates to open, no action potential results; however, after the threshold is crossed, there’s no turning back: Complete depolarization occurs and the stimulus will be transmitted.

When an impulse travels down an axon covered by a Myelin Sheath, the impulse must move between the uninsulated gaps called nodes of Ranvier that exist between each Schwann cell.

When the K+ gates finally close, the neuron has slightly more K+ on the outside than it has Na+ on the inside. This causes the membrane potential to drop slightly lower than the resting potential, and the membrane is said to be hyperpolarized because it has a greater potential. (Because the membrane’s potential is lower, it has more room to “grow.”). This period doesn’t last long, though (well, none of these steps take long!). After the impulse has traveled through the neuron, the action potential is over, and the cell membrane returns to normal (that is, the resting potential).

The refractory period is when the Na+ and K+ are returned to their original sides: Na+ on the outside and K+ on the inside. While the neuron is busy returning everything to normal, it doesn’t respond to any incoming stimuli. After the Na+/K+ pumps return the ions to their rightful side of the neuron’s cell membrane, the neuron is back to its normal polarized state and stays in the resting potential until another impulse comes along.

The following figure shows transmission of an impulse. 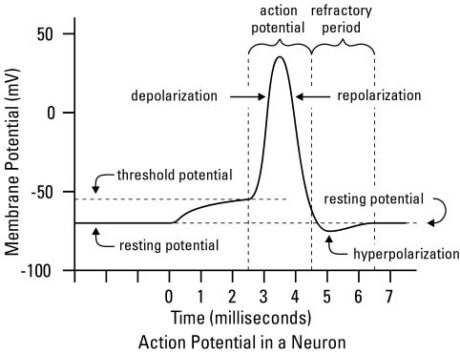 Transmission of a nerve impulse: Resting potential and action potential.

Like the gaps between the Schwann cells on an insulated axon, a gap called a synapse or synaptic cleft separates the axon of one neuron and the dendrites of the next neuron. Neurons don’t touch. The signal must traverse the synapse to continue on its path through the nervous system. Electrical conduction carries an impulse across synapses in the brain, but in other parts of the body, impulses are carried across synapses as the following chemical changes occur:

At the end of the axon from which the impulse is coming, the membrane depolarizes, gated ion channels open, and calcium ions (Ca2+) are allowed to enter the cell.

When the calcium ions rush in, a chemical called a neurotransmitter is released into the synapse.

Whether excitation or inhibition occurs depends on what chemical served as the neurotransmitter and the result that it had. For example, if the neurotransmitter causes the Na+ channels to open, the neuron membrane becomes depolarized, and the impulse is carried through that neuron. If the K+ channels open, the neuron membrane becomes hyperpolarized, and inhibition occurs. The impulse is stopped dead if an action potential cannot be generated. 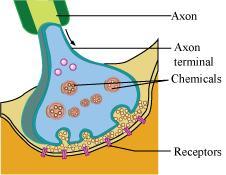 Watch these videos at Youtube for visual explanations https://www.youtube.com/watch?v=QNpPad_Ecvw

Neurons form complex biological neural networks through which nerve impulses (action potentials) travel. Neurons do not touch each other (except in the case of an electrical synapse through a gap junction); instead, neurons interact at close contact points called synapses. A neuron transports its information by way of an action potential. When the nerve impulse arrives at the synapse, it may cause the release of neurotransmitters, which influence another (postsynaptic) neuron. The postsynaptic neuron may receive inputs from many additional neurons, both excitatory and inhibitory. The excitatory and inhibitory influences are summed, and if the net effect is inhibitory, the neuron will be less likely to “fire” (i.e., generate an action potential), and if the net effect is excitatory, the neuron will be more likely to fire. How likely a neuron is to fire depends on how far its membrane potential is from the threshold potential, the voltage at which an action potential is triggered because enough voltage-dependent sodium channels are activated so that the net inward sodium current exceeds all outward currents. Excitatory inputs bring a neuron closer to threshold, while inhibitory inputs bring the neuron farther from threshold. An action potential is an “all-or-none” event; neurons whose membranes have not reached threshold will not fire, while those that do must fire. Once the action potential is initiated (traditionally at the axon hillock), it will propagate along the axon, leading to release of neurotransmitters at the synaptic bouton to pass along information to yet another adjacent neuron.

Stages in neurotransmission at the synapse 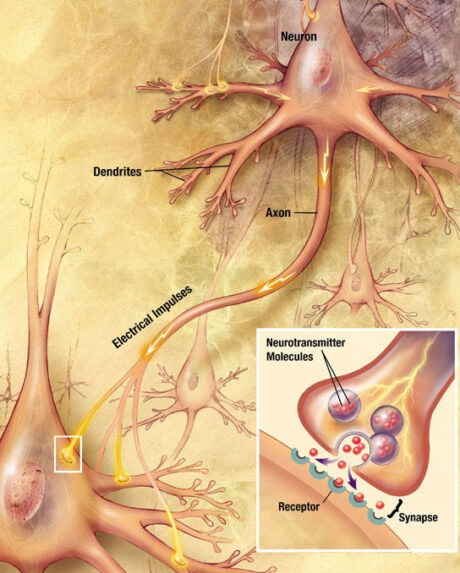 Neurotransmission at a Chemical Synapse: A signal propagating down an axon to the cell body and dendrites of the next cell

Reflex action or reflex is an involuntary action in response to a stimulus. This is a spontaneous action without thinking. For example, we adjust our eyes when exposed to bright light. The peripheral nervous system (PNS) is a system of nerves which connect the central nervous system (CNS) (includes the brain and spinal cord) with other parts of the body.  Reflex action is the result of the coordination of the spinal cord and peripheral nervous system. This action does not involve the brain. The pathway in which impulses travel during the reflex action is called a reflex arc. 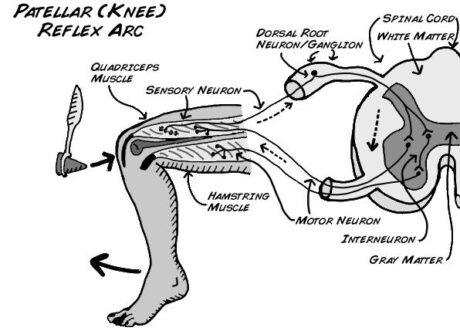 Knee-jerk reflex, also called patellar reflex, is sudden kicking movement of the lower leg in response to a sharp tap on the patellar tendon, which lies just below the kneecap. One of the several positions that a subject may take for the test is to sit with knees bent and with one leg crossed over the other so that the upper foot hangs clear of the floor. The sharp tap on the tendon slightly stretches the quadriceps, the complex of muscles at the front of the upper leg. In reaction these muscles contract, and the contraction tends to straighten the leg in a kicking motion.

When an action is produced with the involvement of thoughts, they are called voluntary action. It involves actions like walking, eating, jumping and running. These actions are produced consciously. Both spinal cord and brain are involved and these coordinate with PNS to generate necessary movements.