Homeostasis is the process by which the body regulates its internal environment for chemical and biological processes to occur. Some of the more important variables that the body needs to control include temperature, and the levels of blood sugar, oxygen and carbon dioxide.

A number of organs are involved in homeostasis, and these include the Lungs, Pancreas, Kidneys, Liver and Skin.

Temperature homeostasis is one of the most important homeostasis that is under the control of the human skin. Temperature homeostasis is keeping the body’s temperature at a steady temperature which will mean it will help the body from overheating or getting to cold. The body’s temperature is tuned to approximately 37o Celsius, which allows the body’s biological enzymes to function at optimum level. When the body temperature rises, the hypothalamus sends nerve signals to sweat-producing cells (Sweat glands) in the skin. The body can sweat one to two liters of water per hour. The sweat is evaporated here by the heat from the body. This is an endothermic process and water has a high latent heat of evaporation. This helps to cool the body.

The skin also has tiny muscles on its surface called arrector pili. These muscles control the orientation of hairs on the skin. When the body is too hot, the muscles relax and the hairs lay flat to allow the air to circulate over the skin. This is what encourages convection and evaporation of sweat form the body’s surface.

When the body is too cold, the arrector pili muscles contract, leading the hairs of the skin to stand up, trapping an insulating layer of still warm air next to the skin. Heat is then conserved. This is not very effective in humans as it is what causes them to get goosebumps. In other haired and furred mammals, this process is useful.

Again, smooth muscles in the peripheral arterioles found in the skin also play a role in temperature homeostasis. The smooth muscles of the arterioles contract when the body’s temperature is low causing vasoconstriction, less heat is carried in the blood from the core to the surface of the body. If the body gets too cold the extremities can be damaged in worst cases.

On the other hand, when the body’s temperature is high, the arteriolar muscles relax causing vasodilatation. This allows more blood and thus more heat to be carried from the core to the body’s surface. This is where it is lost by their convection and the radiation.

The liver plays an important part in homeostasis. However, the liver does not have the ability to perform the homeostatic function if it is not aided by the Pancreas. For the liver to function correctly as an organ in relation to homeostasis, it has to receive information that is giving it instructions on what to do. This is provided by the hormone which is known as insulin, which is secreted into the blood stream from special groups of cells (islets of Langerhans) located in the pancreas.

The Islets of Langerhans detect blood-glucose levels. If the blood-glucose levels are too high, the cells release the hormone insulin to stimulate Liver, muscle and fat cells to absorb glucose from the blood and store it as glycogen or starch. When blood sugar levels are too low, the cells release another hormone called glucagon. Glucagon acts on the Liver, muscle and fat cells and stimulates them to convert glycogen to glucose, releasing it into the blood. Thus, the liver responds to insulin and glucagon (which come from the pancreas) to keep the level of glucose in the blood constant.

The liver also breaks down alcohol, drugs, toxins into harmless substances and excess proteins in the blood into nitrogenous wastes to be excreted out of the body by the kidneys.

Regarding temperature regulation, many metabolic processes take place in the liver all the time, and the heat generated by them is taken by the blood around the body to help in maintaining the desired temperature.

There is a number of advantages that homeostasis has for an animal. These advantages are that it has a survival value, meaning that the animal has the ability to adapt to an environment that is changing. It is able to deal with all sorts of changes like a change in temperature, water balance changes, etc. All animals will attempt to keep the body at a level that is their desired factor so it can achieve the homeostasis that the animal needs to do to survive. This only works with intolerable limits so if the internal environment changes too much it would cause complications and the body would find it difficult to change the environment back to the way it was before the change.

The Blood Vascular System of the Liver

The liver is located in the upper right-hand portion of the abdominal cavity, beneath the diaphragm, and on top of the stomach, right kidney, and intestines.

Shaped like a cone, the liver is a dark reddish-brown organ that weighs about 3 pounds. The liver holds about one pint (13%) of the body’s blood supply at any given moment.

There are 2 distinct sources that supply blood to the liver through the hepatic portal system. These include the following: 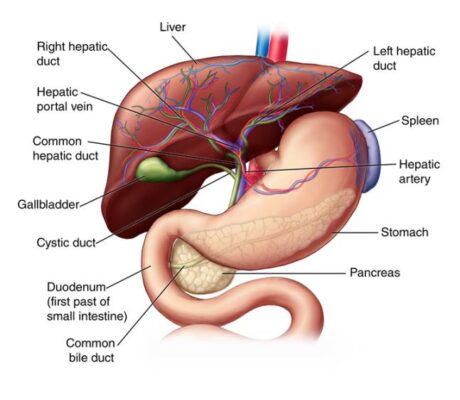 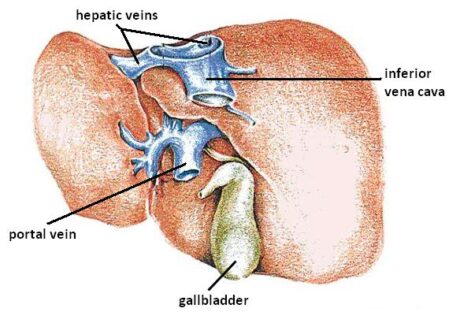 Hepatic veins: An image of a liver with the hepatic veins labeled. They are located in the inferior vena cava. 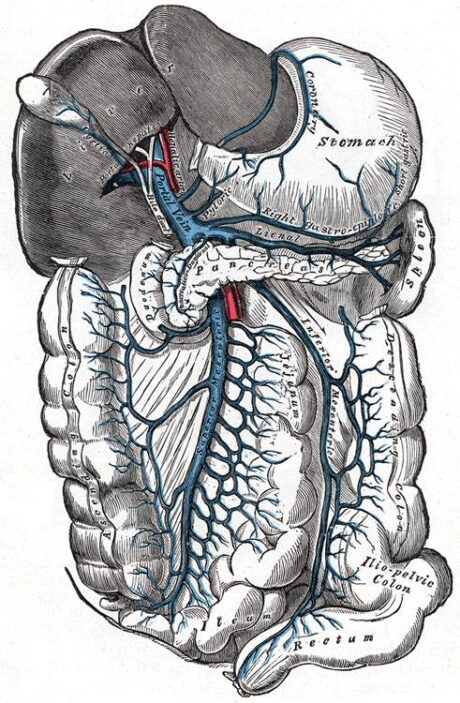 The liver is supplied by two main blood vessels on its right lobe: the hepatic artery and the portal vein. The portal vein brings venous blood from the spleen, pancreas, and small intestine so that the liver can process the nutrients and byproducts of food digestion.

Structure and Functions of the Skin

The skin is the largest organ of the body. It has three main layers, the epidermis, the dermis and the subcutaneous layer.

The epidermis is an elastic layer on the outside that is continually being regenerated. It includes the following:

The dermis is the inner layer that includes the following:

The subcutaneous layer under the dermis is made up of connective tissue and fat (a good insulator).

Functions of the skin