In the human body, the endocrine system consists of a network of glands and secretes hormones to regulate the functions of the body including growth and metabolism. When glands produce an incorrect amount of hormones, it results in endocrine diseases. Therefore, the endocrine system help the body to function properly by coordinating a range of bodily functions.

These hormones help in coordinating the activities of living organisms and their growth. Following are the characteristics of hormones:

A gland secretes a specific substance in the body. There are two types of glands. They are:

Exocrine glands are the glands that secrete their product into a duct. For example, the salivary gland secretes the saliva into the salivary duct.

Endocrine glands are the glands that secrete their product directly into the blood. There are no ducts in endocrine glands. The chemical substance secreted by endocrine glands is called hormone. These hormones travel through the blood and act on the concerned body part. Hormones are a kind of chemical messengers. 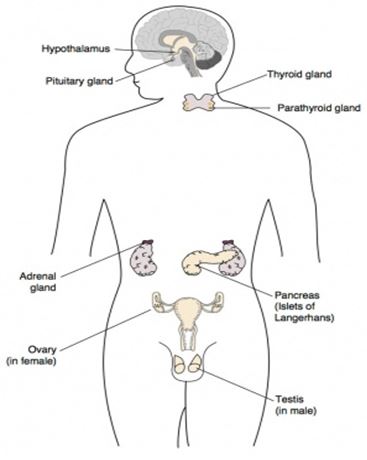 Hypothalamus and pituitary gland are main centres for the coordination of the nervous system and endocrine system. The hypothalamus helps in collecting information from the regions of the brain and from blood vessels passing through it. The information is then passed on to the pituitary gland which by its secretions regulates the activities of all other endocrine glands. In the human body, hormones help in growth, metabolic activities and reproduction. 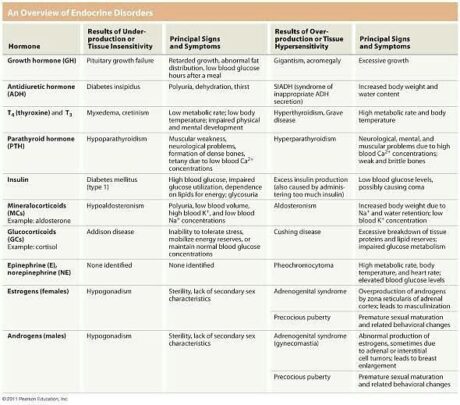 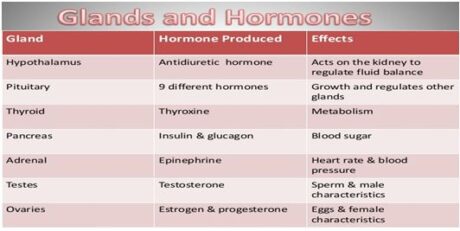 This gland is present in the brain and produces releasing hormone and inhibitory hormone. Hypothalamus regulates the secretions of hormones from the pituitary gland.

The thyroid gland is attached to the windpipe and makes a hormone called thyroxin which contains iodine. The function of this hormone is to control the rate of metabolism of carbohydrates, fats, and proteins in the body. The deficiency of iodine in the diet can cause a deficiency of thyroxin hormone in the body. This causes a disease called a goitre.

This gland is present in the lower part of the neck and upper part of the chest. Thymus gland secretes thymus hormone which helps in the development of the immune system of the body.

This hormone is present just below the stomach and secretes a hormone called insulin. The function of insulin is to lower the blood sugar level. The deficiency of insulin hormone causes a disease called diabetes. A person having diabetes has large quantities of sugar in the blood.

Adrenal glands are located at the top of two kidneys. These glands secrete an adrenal hormone that regulates heart rate, breathing rate, blood pressure, and carbohydrate metabolism. This hormone is secreted in large amounts when the person is excited or frightened. This gland is also called glands of emergency.

This gland is present only in males and makes male sex hormones called testosterone. The testosterone controls the development of male sex organs and male features such as deeper voice, mustache, beard, etc.

This gland is present in females only and make a female sex hormone called oestrogen and progesterone. Oestrogen helps in controlling the development of female sex organs and female features such as feminine voice, soft skin, and mammary glands. The progesterone hormone controls the uterus changes in the menstrual cycle. It helps in the maintenance of pregnancy.

The excess or deficiency of hormones has a harmful effect on our bodies. So in order to control and regulate the production and release of hormones in the body, there is a feedback mechanism that is in-built in our body.