Structure and Functions of the Eye

Structure of the Eye

Structure of the eye is essential to understand as it one of the important sensory organs in the human body. It is mainly responsible for vision, differentiation of colour (the human eye can differentiate approximately 10 – 12 million colours) and maintaining the biological clock of the human body. The human eye can be compared to a camera as both functions by gathering, focusing, and transmitting the light through the lens for creating an image of an object. 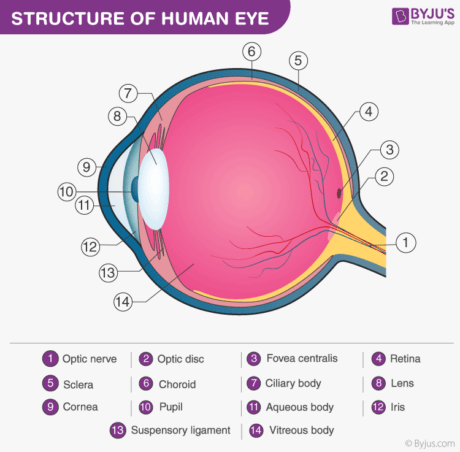 Human Eye Diagram: Contrary to popular belief, the eyes are not perfectly spherical; instead, it is made up of two separate segments fused together.

To understand more in detail about our eye and how our eye functions, we need to look into the structure of the human eye.

Structure and Functions of the Human Eye

The External Structure of an Eye

The parts of the eye that are visible externally comprise the external structure of the eye.

These include the following:-

Sclera: It is a tough and thick white sheath that protects the inner parts of the eye. We know it as the ‘White of the eye’.

Conjunctiva: It is a thin transparent membrane that is spread across the sclera. It keeps the eyes moist and clear by secreting small amounts of mucus and tears.

Cornea: It is the transparent layer of skin that is spread over the pupil and the iris. The main role of the cornea is to refract the light that enters the eyes.

Iris: It is a pigmented layer of tissues that make up the coloured portion of the eye. Its primary function is to control the size of the pupil, depending on the amount of light entering it.

Pupil: It is the small opening located in the middle of the Iris. It allows light to come in.

The Internal Structure of an Eye

The internal structure of the eye includes the following parts:

Lens: It is a transparent, biconvex, and an adjustable part of an eye. The lens with the help of the cornea refracts light focused on the retina, therefore creating images on it.

Retina: It is the layer present at the back of the eye where all the images are formed. It is the third and inner coat of the eye which is very sensitive towards the light because of the presence of Photoreceptors. The retina functions by converting the light rays into impulses and sending the signals to the brain through the optic nerve.

Optic nerve: It is located at the end of the eyes, behind the retina. The optic nerve is mainly responsible for carrying all the nerve impulses from the photoreceptors to the human brain, without which vision would not be possible.

Vitreous Humour: it is a semi-solid, transparent, jelly-like substance that covers the interior portion of the eyes. It plays an important role in maintaining the shape of the eye and also causes refraction of light before it reaches the retina.

Structure and Functions of the Ear

Human ear, is the organ of hearing and equilibrium that detects and analyzes sound by transduction (or the conversion of sound waves into electrochemical impulses) and maintains the sense of balance (equilibrium).

Structure of the Human Ear.

The human ear, like that of other mammals, contains sense organs that serve two quite different functions: that of hearing and that of postural equilibrium and coordination of head and eye movements.

Anatomically, the ear has three distinguishable parts: the outer, middle, and inner ear.

The middle ear is a narrow air-filled cavity in the temporal bone. It is spanned by a chain of three tiny bones—the malleus (hammer), incus (anvil), and stapes (stirrup), collectively called the auditory ossicles. This ossicular chain conducts sound from the tympanic membrane to the inner ear. It is a complicated system of fluid-filled passages and cavities located deep within the rock-hard petrous portion of the temporal bone.

The inner ear consists of two functional units: the vestibular apparatus, consisting of the 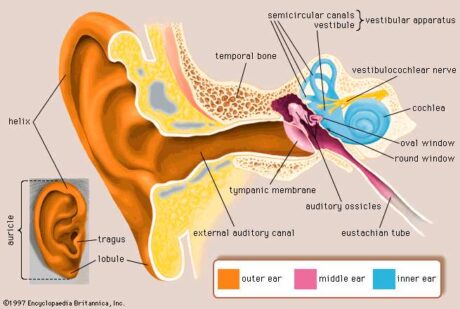 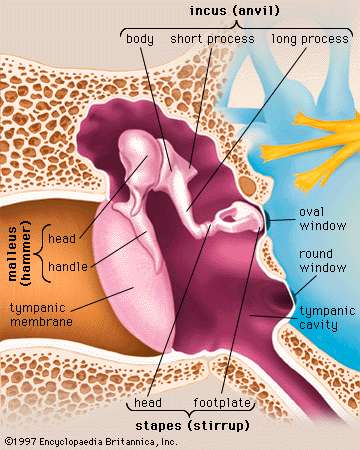 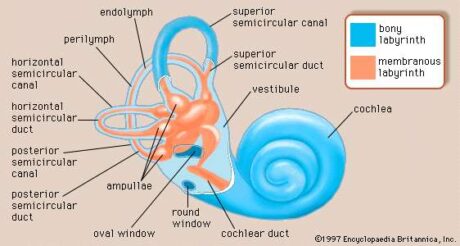 The two labyrinths of the inner ear. 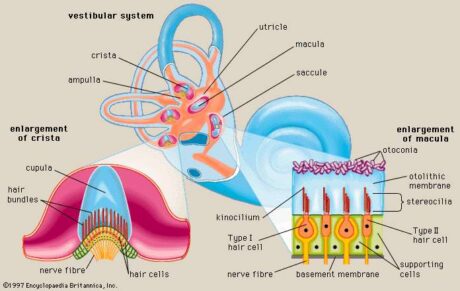 The membranous labyrinth of the vestibular system (centre), which contains the organs of balance, and (lower left) the cristae of the semicircular ducts and (lower right) the maculae of the utricle and saccule.Encyclopædia Britannica, Inc.

The Skin as a Sense Organ

The skin and accessory structures perform a variety of essential functions, such as protecting the body from invasion by microorganisms, chemicals, and other environmental factors; preventing dehydration; acting as a sensory organ; modulating body temperature and electrolyte balance; and synthesizing vitamin D. The underlying hypodermis has important roles in storing fats, forming a “cushion” over underlying structures, and providing insulation from cold temperatures.

The skin protects the body against pathogens and chemicals, minimizes loss or entry of water, and blocks the harmful effects of sunlight. It also is the first line of defense against abrasive activity due to contact with grit, microbes, or harmful chemicals.

The skin flora, or microorganisms which reside on the skin, play an important role in protection. The skin flora can protect the human host by preventing transient pathogenic organisms from colonizing the skin surface, either by competing for nutrients, secreting chemicals against them, or stimulating the skin’s immune system. Sweat excreted from sweat glands also deters microbes from over-colonizing the skin surface by generating dermicidin, which has antibiotic properties. Another factor affecting the growth of pathological bacteria is alkaline conditions. Bacteria are unable to attach effectively to the skin and are more readily shed in alkaline conditions.

The fact that you can feel an ant crawling on your skin, allowing you to flick it off before it bites, is because the skin, and especially the hairs projecting from hair follicles in the skin, can sense changes in the environment. The hair root plexus surrounding the base of the hair follicle senses a disturbance, and then transmits the information to the central nervous system (brain and spinal cord), which can then respond by activating the skeletal muscles of your eyes to see the ant and the skeletal muscles of the body to act against the ant.

The skin acts as a sense organ because the epidermis, dermis, and the hypodermis contain specialized sensory nerve structures that detect touch, surface temperature, and pain. These receptors are more concentrated on the tips of the fingers, which are most sensitive to touch, especially the Meissner corpuscle (tactile corpuscle) (Figure 1), which responds to light touch, and the Pacinian corpuscle (lamellated corpuscle), which responds to vibration. Merkel cells, seen scattered in the stratum basale, are also touch receptors. In addition to these specialized receptors, there are sensory nerves connected to each hair follicle, pain and temperature receptors scattered throughout the skin, and motor nerves innervate the arrector pili muscles and glands. This rich innervation helps us sense our environment and react accordingly.

The sudoriferous glands, accessory structures to the skin, secrete sweat to cool the body when it becomes warm. Even when the body does not appear to be noticeably sweating, approximately 500 mL of sweat (insensible perspiration) are secreted a day. If the body becomes excessively warm due to high temperatures, vigorous activity, or a combination of the two, sweat glands will be stimulated by the sympathetic nervous system to produce large amounts of sweat, as much as 0.7 to 1.5 L per hour for an active person. When the sweat evaporates from the skin surface, the body is cooled as body heat is dissipated.

In addition to sweating, arterioles in the dermis dilate so that excess heat carried by the blood can

dissipate through the skin and into the surrounding environment.

When body temperatures drop, the arterioles constrict to minimize heat loss, particularly in the ends of the digits and tip of the nose.. Although the temperature of the skin drops as a result, passive heat loss is prevented, and internal organs and structures remain warm. If the temperature of the skin drops too much (such as environmental temperatures below freezing), the conservation of body core heat can result in the skin actually freezing, a condition called frostbite.

The epidermal layer of human skin synthesizes vitamin D when exposed to UV radiation. In the presence of sunlight, a form of vitamin D3 called cholecalciferol is synthesized from a derivative of the steroid cholesterol in the skin. The liver converts cholecalciferol to calcidiol, which is then converted to calcitriol (the active chemical form of the vitamin) in the kidneys. Vitamin D is essential for normal absorption of calcium and phosphorous, which are required for healthy bones. The absence of sun exposure can lead to a lack of vitamin D in the body, leading to a condition called rickets, a painful condition in children where the bones are misshapen due to a lack of calcium, causing bowleggedness. Elderly individuals who suffer from vitamin D deficiency can develop a condition called osteomalacia, a softening of the bones. In present day society, vitamin D is added as a supplement to many foods, including milk and orange juice, compensating for the need for sun exposure. In addition to its essential role in bone health, vitamin D is essential for general immunity against bacterial, viral, and fungal infections. Recent studies are also finding a link between insufficient vitamin D and cancer.